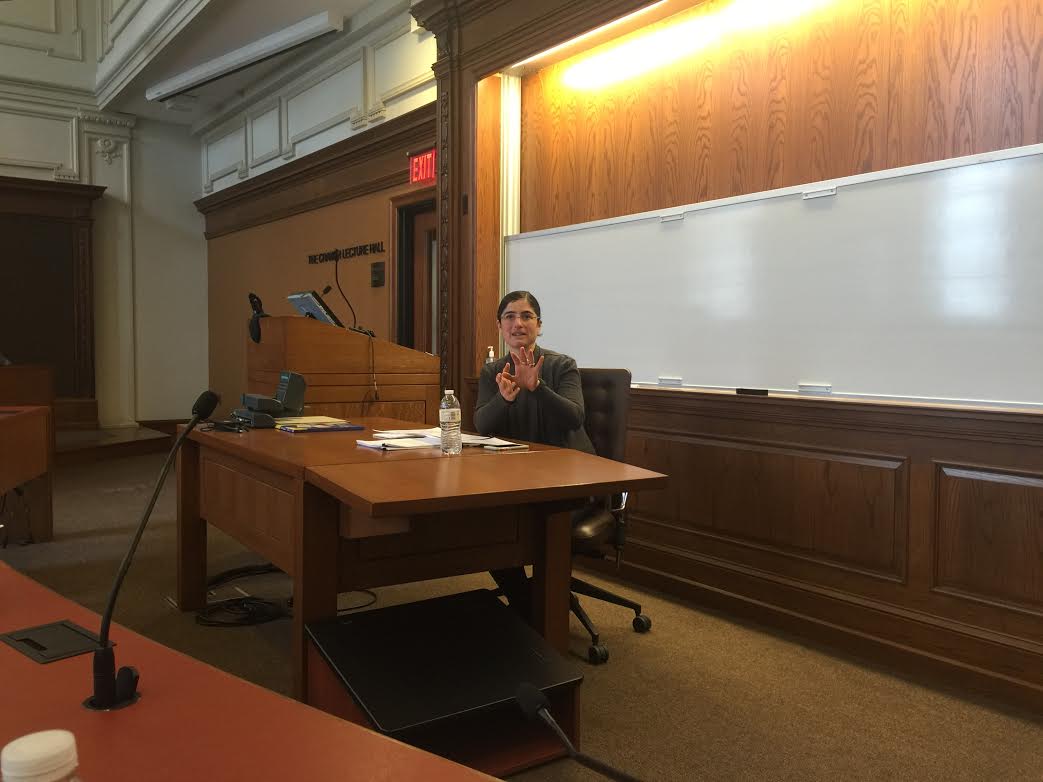 Surprisingly, scholars on developed this concept about 5 or 6 years ago. Professor Lee, herself, shared that she first stumbled upon the general idea when she was in law school. While researching for a paper on the civil rights movement of the 1940’s and 1950’s, she found that the National Labor Relations Board took a different approach than the courts when it came to discrimination law under the Constitution. And Lee realized that there was a need for some sort of analytic category to describe that particular phenomenon.

It is exciting that this area of study is expanding, particularly as scholars realize the potential power of creating change through agency procedures rather than just relying on the judicial system. “You may be able to have a greater affect with agencies, within agencies and have a greater constitutional effect than with courts.”

One of the interesting examples that Professor Lee mentioned was the issue of same-sex marriage. We learned that the very first decision to find DOMA’s same-sex marriage ban unconstitutional did not happen within the judicial system – it was instead first “struck down” by an administrative agency, more specifically an adjudication by the Office of Personnel Management. The case involved an employee whose domestic partner was denied benefits.

Within Administrative Constitutionalism, there have been some fascinating agency trends, as Professor Lee discussed with us. For instance, sometimes agencies recognize the court’s position but enforce it in a way that other courts would not. In the case of discrimination law, some agencies strive to embody equality in their actions rather than just waiting to be dinged for unconstitutionality.

We then shifted to a normative focus, to discuss whether Administrative Constitutionalism is a good thing or a bad thing. One important consideration is that judicial decisions have a wider impact, either providing persuasive or mandatory authority; whereas an agency’s decision is limited to the subjects of the rulemaking or adjudication. However, agencies’ narrow impact can be a virtue as it encourages more experimentation with reasoning and it often results in less “under-enforcement” of constitutionalism.

Professor Lee ended by presenting a few potential solutions to the natural discomfort that often accompanies the idea that administrative agencies may be making important constitutional decisions. She emphasized that the point is to encourage more “constitutional consciousness” among agencies – either through creating independent agencies to infuse that consciousness or perhaps to create a position within agencies to infuse it into the bureaucracy.

All in all, Professor Lee’s talk was incredibly insightful and provided us with a greater understanding of an interesting trend in the legal sphere – and we are definitely excited to follow the growth of Administrative Constitutionalism scholarship as it continues to develop.

Administrative constitutionalism can be normatively desirable even if it is neither transparent nor participatory and it is defensible even if it varies from court doctrine and is contrary to congressional command.

For example, the Federal Communications Commission (“FCC”), during the 1960s and 70s, adopted equal employment rules requiring the companies it regulated to implement equal employment. In the absence of clearly defined judicial standards, FCC officials and other administrators “creatively expanded the Supreme Court’s state action doctrine in order to justify, adopt, and enforce equal employment rules” and “argued that the Constitution authorized, and perhaps even compelled, agencies and the businesses they regulated to adopt equal employment policies.”[2] In a statement from the then-Associate General Counsel, the FCC, under the Constitution and various policies established to combat inequalities in employment practices, had the authority to deny licenses to broadcasters with discriminatory hiring practices.[3]

Administrative constitutionalism benefits from an agency’s background of expertise in the areas they regulate. For decades now, federal courts have cited and deferred to an agency’s particular area of expertise as “policy arguments are more properly addressed to legislators or administrators . . . [than] to judges.”[4] Even in the face of implicit congressional authorization to delegate authority to an agency, a court may not substitute its own construction of a statutory provision for a reasonable interpretation made by the administrator of an agency.[5] Such longstanding deference is understandable: agencies, through its policy expertise, “are likely to be better at integrating constitutional concerns with the least disruption to these schemes and regulatory priorities.”[6]

Critics have raised the concern that administrative constitutionalism is an undemocratic process. After all, the decision to implement or adopt an interpretation of the Constitution is at an agency’s discretion.[7] But does the law require that agencies demonstrate their explicit reliance on the Constitution to engage in administrative constitutionalism? Lee notes that an agency need not display such reliance if it can justify its interpretation as being a reasonable construction of relevant statutes and if the interpretation can pass arbitrary and capricious review. Apart from certain situations in closed-record proceedings, current doctrine does not require a thorough incantation of constitutional considerations.

[7] Sections 557(d)(1)(A) and (B) of the Administrative Procedure Act requires an agency to disclose any constitutional considerations if they were (1) introduced by outside actors; (2) “relevant to the merits of the proceeding,” and (3) if the outside actor was an “interested person.”

If administrative constitutionalism is to exist, then administrative agencies should be required to take their view of the constitution from the head of a branch of government, just as trial courts must defer to the Supreme Court.  As agencies are housed under the executive branch, the President should set the interpretive agenda of all non-independent agencies.

Recently, Deputy Dean Sophia Lee spoke to the Journal about the seemingly-pervasive-yet-generally-avoided phenomenon of administrative constitutionalism.  At the onset of the discussion, Professor Lee noted the sparseness of Supreme Court review during the 1960s-70s surrounding specific constitutional questions in employment discrimination, which she found significant considering the fairly important strides that were being made in that area at the time.

This phenomenon prompted her to look more closely at administrative adjudications occurring at that time.  Through this research, Professor Lee found adjudications within agencies that interpreted the constitution to recognize an extension of rights which may not yet have made it to the courts.  This realization brought Professor Lee, and a certain number of her peers,[1] to the ultimate idea of administrative constitutionalism, or the idea that agencies interpret and implement the United States Constitution within their respective organizations,[2] which in turn creates precedent within those organizations.

Administrative agencies serve at the pleasure of the President, who has the obligation to “take Care that the Laws be faithfully executed, and shall Commission all Officers of the United States.”[4]  If administrative agencies are engaging in constitutional interpretation, guidance should come from the Chief Executive on interpretations of constitutional questions that have not yet been espoused by the Courts.

While some may criticize this position as a form of executive aggrandizement, several scholars throughout history have advocated for increased constitutional responsibility by the non-judicial branches,[5] and, indeed, is a historical foundation for originalism and judicial deference.  If agencies will engage the constitution in this way, the executive is best suited to provide guidance for how such issues are to be construed.

[2] Sophia Lee, From the History to the Theory of Administrative Constitutionalism, (forthcoming).