The Political Implications of the United States Infrastructure 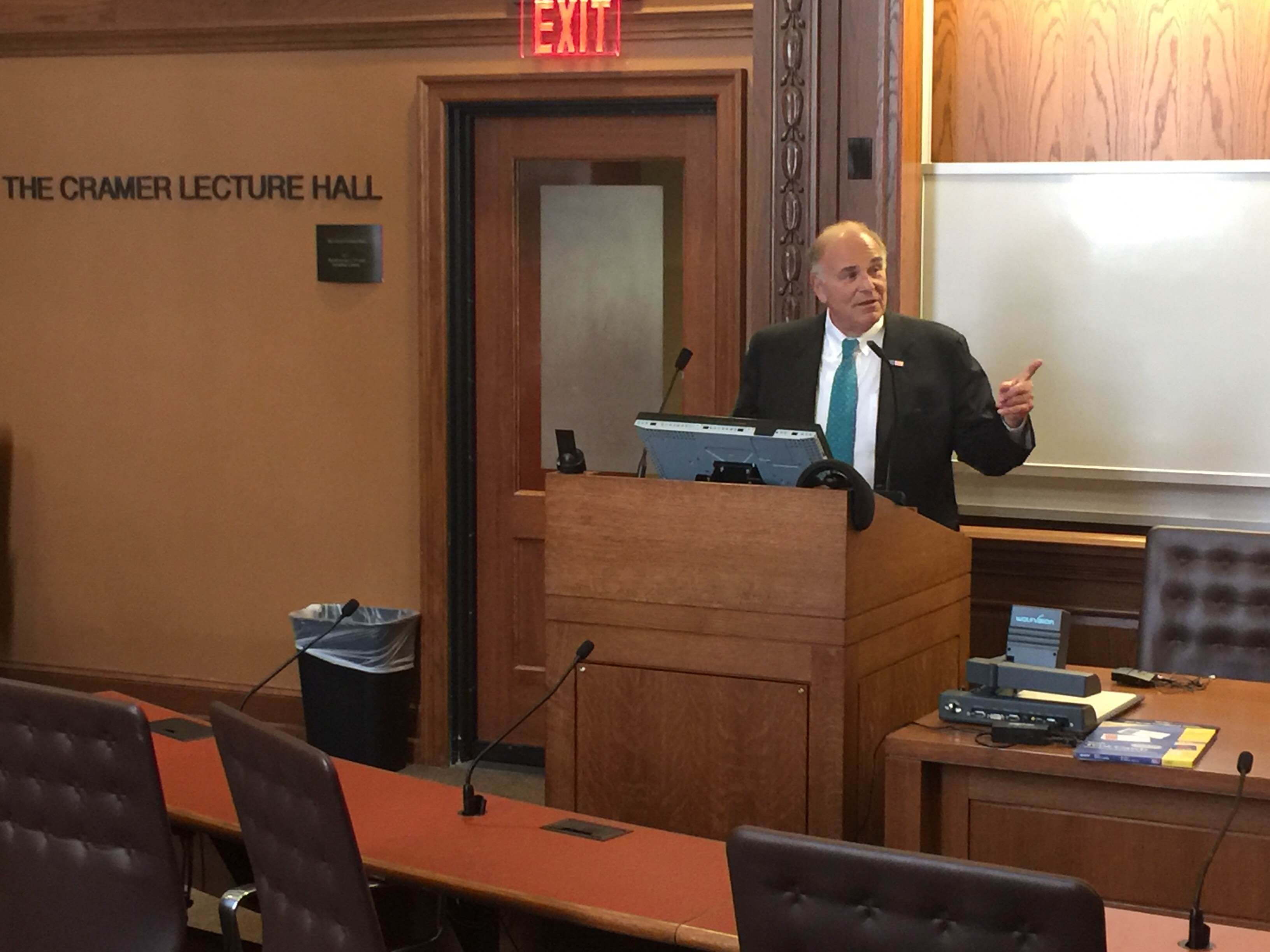 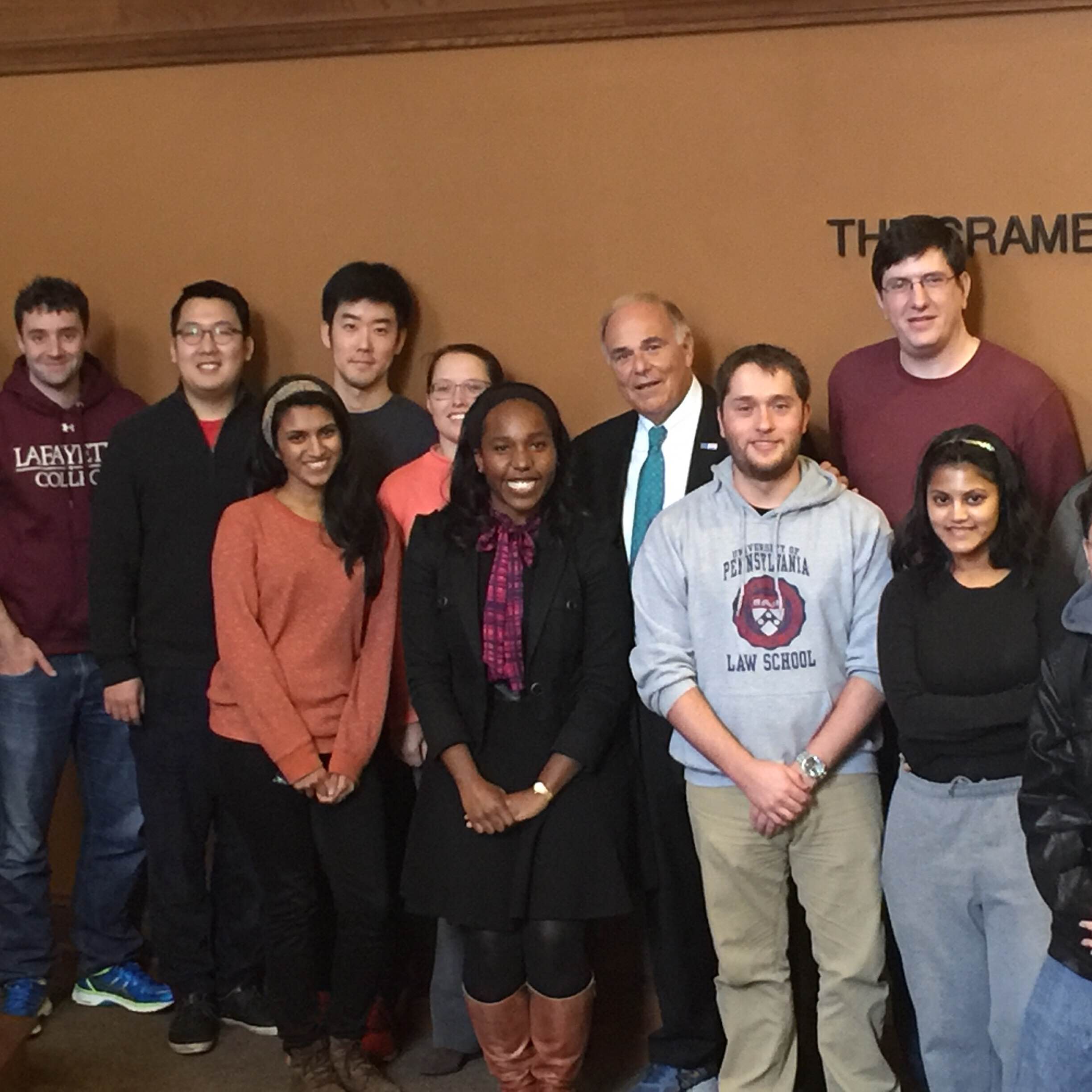 Governor Rendell spoke on the current state of infrastructure in the United States, why it’s imperative to invest in it now, and how funding to do so could be found.  His view is that the United States is currently at a crossroads.  The country became great because of its willingness to undertake big governmental projects.  Jefferson approved the Erie Canal, Lincoln invested in the transcontinental railroad, Eisenhower built the interstate highway system, etc.…  If we lose our willingness to take these risks, and to invest in ourselves, we’ll find behind as a country.  There are times when the government needs to be the catalyst for large-scale development and progress, and that requires occasional taxes.  As a country, we must be willing to pay for them.

The high-level message was that support for infrastructure investment is nearly unanimous among politicians, but that large spending bills necessary for such investment can’t get passed due to Republican resistance to any tax increases (Norcross pledge).   The easiest and most logical method of funding would be to raise the gas tax, for the following reasons:

The Governor also explained why representatives shouldn’t be as scared of increasing taxes as they currently are.  He cited his own example, overseeing a $2.7 billion tax increase in his first term.  His approval ratings tanked, but recovered as voters saw the effects of the tax increase (economic development, expanded kindergarten, etc.).  He won his second term by a 21-point margin.  He also emphasized that Reagan raised taxes 11 times, including raising the gas tax.

The Governor cited evidence for the need to invest:  40% of pipes in Philadelphia were laid in the 19th century.  Many of them are made of wood, and located close to the surface, so they freeze and break frequently.  Nationwide, more than 1 in 4 bridges is either structurally deficient or functionally obsolete.  20 Years ago, the World Economic Forum ranked the U.S. #1 in infrastructure.  Today, the country ranks 15th in the world by the same measure.  Only 2 East Coast ports are currently deep enough to service the SuperMaxx cargo ships that conduct much of today’s international trade, meaning business gets diverted to Canadian ports.

Jobs like those at the ports are the ones that provide livable wages to blue-collar workers, and help strengthen the middle class.  Infrastructure investing could create and sustain a lot of those jobs, helping to accomplish something both political parties’ candidates are currently emphasizing.  For every $1 billion in infrastructure spending, 25,000 jobs are created (US DOT).

Lastly, the Governor also mentioned other potential funding methods, like Build America Bonds, a national infrastructure bank, or the TFIA loan program.  However, he believes the best solution is a gas tax increase or the creation of a federal capital budget to provide a long-term, dedicated source of funding for U.S. infrastructure.

Governor Rendell stated that he was able to be successful and popular as a Governor in spite of record tax raise during his term in office. His focus on Friday was on infrastructure spending, and how the government needs to tax more in order to fix the crumbling infrastructure across the U.S. His stance on Friday was very pro-tax. In regard to taxing for infrastructure, he said, “if you deliver goods in return, people aren’t going to complain.”

Congress, for the first time in several years, passed a bill to fund the Highway Trust Fund.  Aptly named “Fixing America’s Surface Transportation (FAST) Act; the Act allows spending to fix our roads and highways. But the people are complaining of the Act’s shortcomings.

In recent years, the Highway Trust Fund has been depleting funds more quickly than it can replenish through tax revenue. And it will likely have to operate without any reserves in the future. Before the FAST Act was passed, Congress had to come up with contingency plans each year to deal with the Highway Trust Fund. However, with the passing of the Act, Congress has bought itself some time. Yet the Fund continues to be inappropriately funded, and the issue is in need of a permanent fix.

Another issue with the taxes in regard to highway funding is the lack of the connection between the tax structure and the benefit people receive from the taxation. Under the FAST Act, the highway funding will be drawn from the general electorate, taxing even the people that don’t drive.

The general taxation, some argue, hampers growth. For example, if one uses a neoclassical economic model, like the Macroeconomic Growth model used by Joint Committee on Taxation (U.S. Congress), to study the effects of tax on key components of economic measures, one will see the harm tax has on economic growth. Economists (Chicago Booth survey of economists, the Tax Foundation, Brookings Institution) recognize that tax cuts can lead to stronger growth in the economy.

With the weakness shown in the economy, especially as we entered 2016, a solid argument could be made for less taxation spending. The world economy looks bleak, with China’s growth coming to a halt and Japan’s central bank resorting to negative interest rate, and the market is very concerned about the future.

Many see America, once a place of freedom and small government, as a place that is now overregulated with taxes and rules to expand the welfare state. And economists see this as a threat to the U.S. economy. For example, Dodd-Frank, while the goals were noble at the time of its passage, is now at 848 pages—becoming far too intricate and complicated.  Another example is Sarbanes-Oxley, an act that strives to curb corporate fraud, has made it so burdensome to be compliant that many companies are looking overseas or choosing to stay private.

The way to fix the highway is not through general taxation. A better way to deal with the infrastructure deterioration is the solution is the gas tax (something Governor Rendell did briefly mentioned on Friday). The government should raise the federal gas tax instead of pooling money from the general tax. As Governor mentioned, such tax would be easy to raise such taxes—as “not many people pay attention to such tax.” Plus, a gas tax has the added bonus of targeting the very people that do harm to our highways, bridges, and roads—those with cars—without harming the non-culprits.

As co-chair of “Building America’s Future”, a bi-partisan group dedicated to addressing our nation’s urgent infrastructure needs, Governor Rendell has been able to survey the widespread breakdown in our nation’s infrastructure. Governor Rendell cited how 20% of the nation’s bridges are classified as structurally deficient, 34% of the nation’s highways are deficient, and the lack of any ports equipped to handle the new wave of supermax freighters being built. In addition to all of these statistics Governor Rendell highlighted that this does not even include the insufficient funding of our schools, utilities, railways, etc.

These failures to maintain adequate infrastructure harms our country in a number of ways. It makes it more difficult to provide adequate services to our citizens, to encourage economic growth, and to compete in a global economy with countries that have better maintained and developed infrastructures. These effects on the quality of life of our citizens and the economic health of our country are clearly undesirable, so why hasn’t there been any large, bipartisan effort to address this pressing need?

Governor Rendell says that the reason the infrastructure crisis has not been addressed is because our nation’s politicians lack the political will to make the difficult decisions to address this crisis. The reason difficult decisions need to be made is because there is no money to fix this multi-billion dollar problem. One underfunded infrastructure problem highlights the problem.

The Highway Trust Fund is intended to address this issue, but politicians have raided it time and time again in order to deal with the constant budget shortages at the national level. But, even if the trust had not been touched for anything other than its intended purpose of maintaining the national highway system, there simply would not be enough money in the fund. The last time the federal gas tax was raised was during the Clinton administration. The only way to adequately fund the budget needed to fix the highway system is to significantly raise the federal gas tax, but all politicians run from publicly supporting any tax increase. The crux of the problem is that politicians realize that taxes need to be raised but fear the backlash from voters. Governor Rendell’s political career shows though that this fear is unfounded.

Governor Rendell was the first governor in Pennsylvania history to raise taxes during his first term, and it was the second largest tax hike in Pennsylvania history. In spite of this, or perhaps even because of this, the Governor was elected to a second term. Further, all of the incumbents who voted for the tax increase for infrastructure kept their seats in the next election. The reason for this, Governor Rendell explained, is that when the voters are told the problem with the infrastructure and the lack of funding, then they understand that in order to ensure a great future for our country we have to raise taxes in order to address this issue.

Governor Rendell’s solution is to engage voters instead of trying to appease them. By doing this he was able to accomplish a multi-billion dollar bi-partisan infrastructure project in the nation’s sixth most populous state while keeping his position as Governor.  Governor Rendell’s solution to the problem is the only one so far that respects the voters, and works with them to ensure the greatness of this nation and its infrastructure for generations to come.